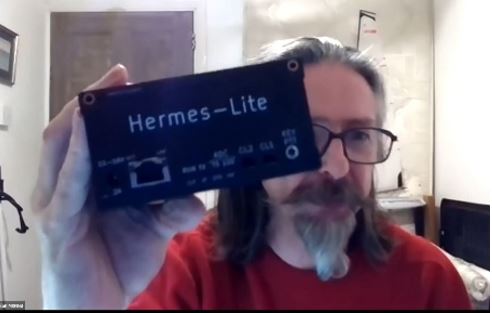 Alan Hopper M0NNB kindly agreed to give a talk on the SparkSDR software he has written for the Hermes Lite 2 SDR 5W SDR: A 5W SDR HF Transceiver. A Q&A session then followed. Eighteen members were on the Zoom session; a recording was made. An edited version will soon be available on the new LEFARS Facebook channel.

Alan used his presentation originally for the Dorking Radio Club supplemented by screen-sharing his second Hermes Lite 2 located remotely in the shack at the end of the garden, to give live demonstrations of SparkSDR in use. Alan has been licensed for seven years. He mentioned that his very first contact with a Foundation licence was a WSPR confirmation with Australia. What next? 😊 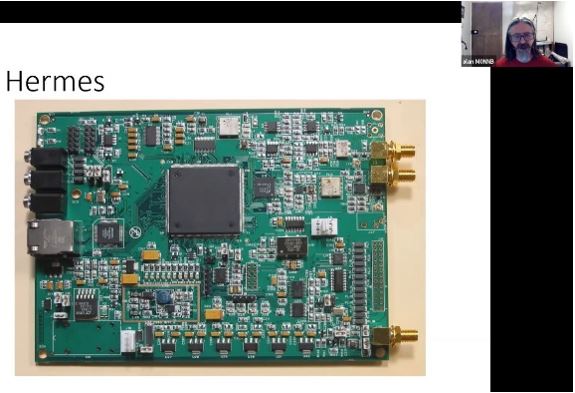 The Hermes SDR radio was based and evolved from an earlier Open HPSDR community project in 2005. A high-quality Direct Sampling radio, the FPGA-based board (Field Programmable Gate array – a collection of 1000’s of logic gates capable of being programmed to perform multiple parallel operations) cost about £800. RF output was 500mW. The analogue-to-digital converter (ADC) alone was over £100.

The Hermes board was later to be incorporated into the Apache Labs SDR series with additional filtering and a PA stage and ongoing developments.

In 2014, Alan M0NNB came across Steve Haynal KF7O who realised that a ADSL broadband chip, costing about £18, contained everything needed for a SDR transceiver. Made by Analog Devices, the AD9866 produced 100mW output on HF and included the ADC and DAC (digital-to-analogue) converters . Early prototypes of the Hermes SDR transceiver used a development FPGA board (Hermes Lite 0.9 is below right). 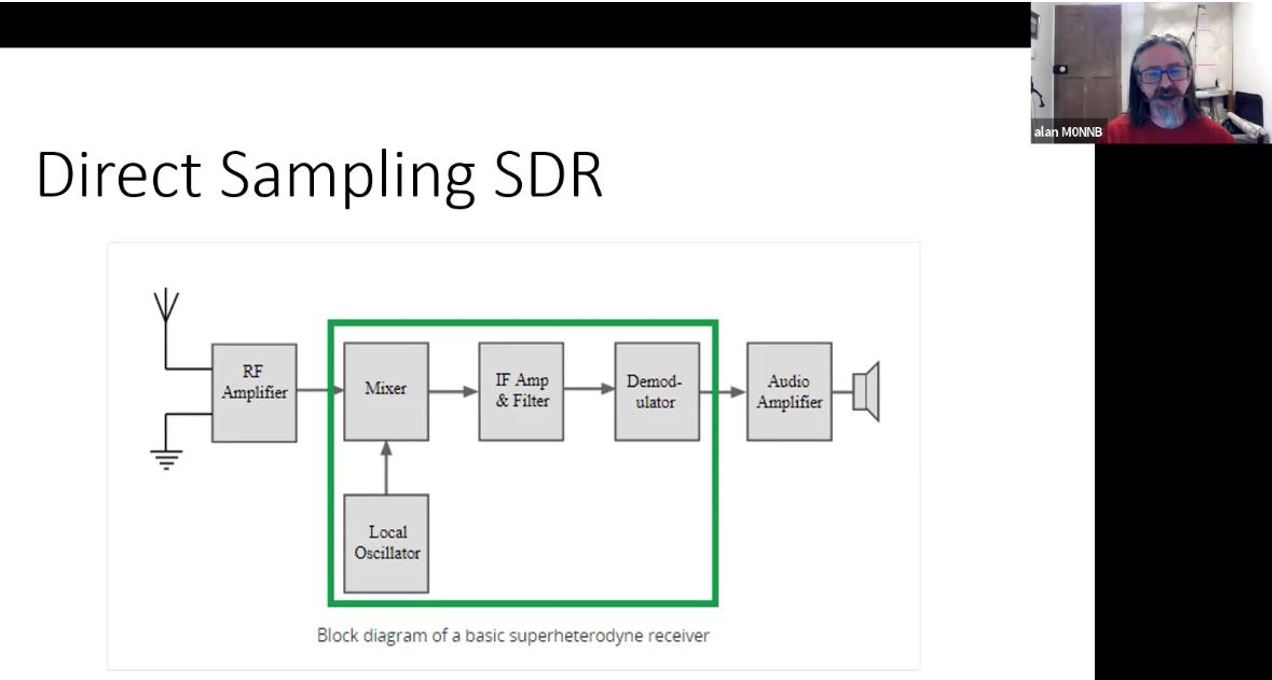 The PCB on the right contains the AD9866 broadband chip, a crystal, some other essential hardware components, totalling around £40 of components. The FPGA development board is on the left of the image. It is the FPGA that does the processing of a slice of the HF band to be sampled. With a cost of $40 for the development board and a total cost of about £100. Although the ADC sampling rate was lower, performance was similar to the more expensive Hermes. Hermes Lite 1.1 was developed and addon boards such as a 5W PA and filter boards were being developed. The hardware was compatible with the Apache Lab SDR software being supported and run on a PC.

Hermes Lite 2 came out as a complete PCB and included the FPGA but also a 5W MOSFET PA, low and high pass filters, the AD9866 modem chip, and Ethernet network interface for the computer. A fully open-source community project, the board, also designed using open source tools, has been manufactured in China by Makerfab and is now sold as a complete kit including case. The complete kit will set you back around £250 but allow for £70-£80 for VAT charges. They are built in batches, with over 600 produced to date. 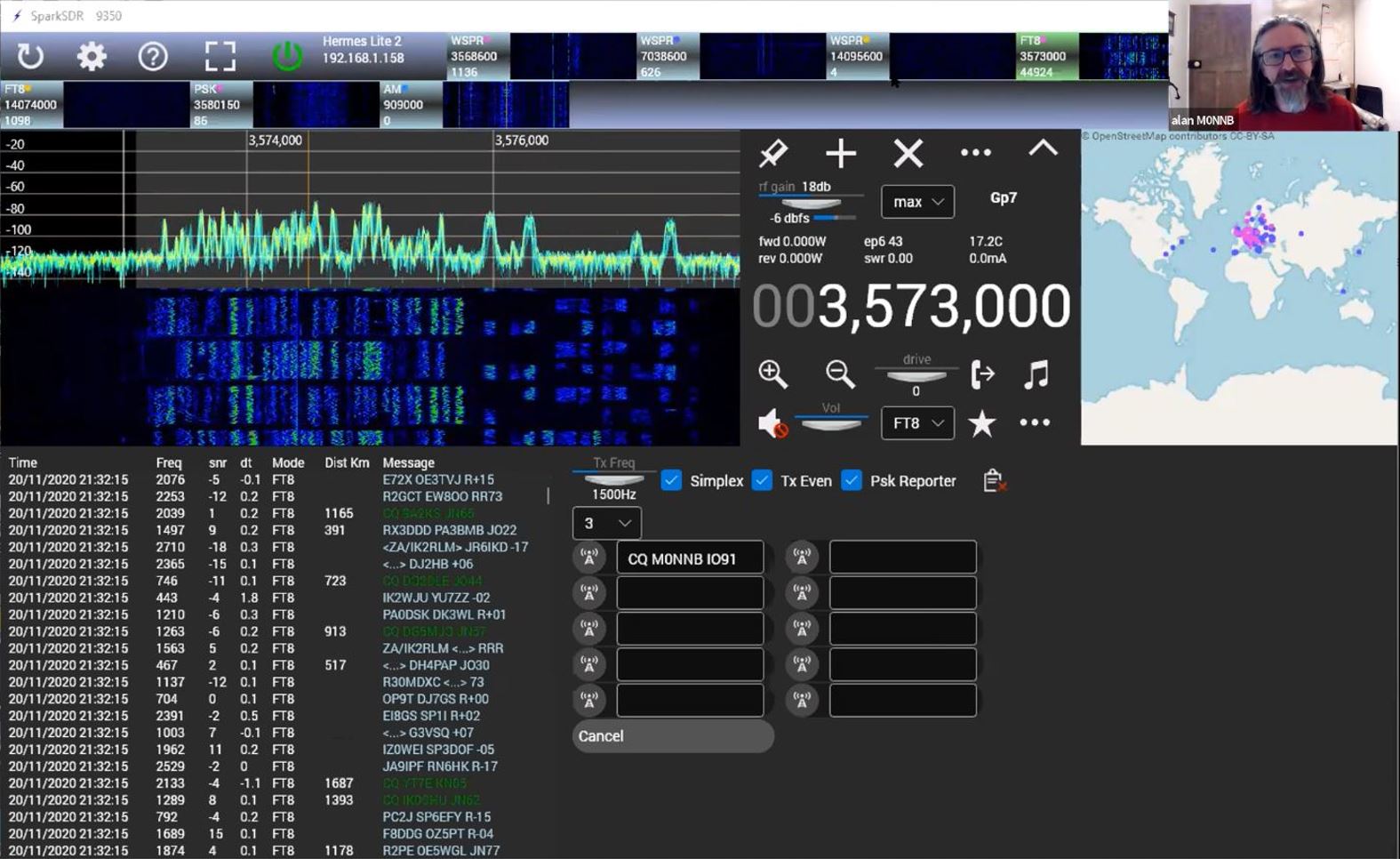 The Hermes Lite 2 connects to the PC via a gigabit LAN ethernet cable. Thus the unit can be installed in the shack or wherever convenient for remote operation. The PC runs SDR software, such as SparkSDR, and uses the computer’s microphone and speaker such as a headset via a traditional soundcard.

Alan M0NNB demonstrated his SparkSDR software and showed its versatility. SparkSDR supports many modes but also multiple receivers. Each can be on the same or different bands. Advanced audio processing for SSB (compression) and direct decoding of digital modes was shown. SparkSDR runs on most modern desktop operating systems, as well as offering good performance on a Raspberry Pi 4.

First though, back to basics and a look at the block diagram of a Direct Sampling SDR. The blocks within the green box are all done by software.

Adding an additional receiver (within the capabilities of the PC) duplicates the above in software.
Below an example shown by Alan after running for 90 minutes. FT8 decode on 80m had 42,000 signals decoded but also additional simultaneous receive instances of WSPR on 80m, 40m and 20m. The map shows live stations as decoded.

The video of the talk includes a demonstration of the various SparkSDR modes and features, a discussion of the test data of the Hermes Lite 2 hardware and an informative Q&A session. This article will appear soon on the LEFARS Blog or website and include the direct link to view the talk.

LEFARS would like to thank Alan M0NNB for an informative and interesting talk. At least one person ordered a Hermes Lite 2 afterwards and used it on the 60m net on Sunday 24th January.