The first (of two) LEFARS external events in August this year took place over the weekend of 21st and 22nd  at Trinity Buoy Wharf, Poplar, London E14. It was an opportunity once again to participate in the  International Lighthouse Lightship weekend for another year. 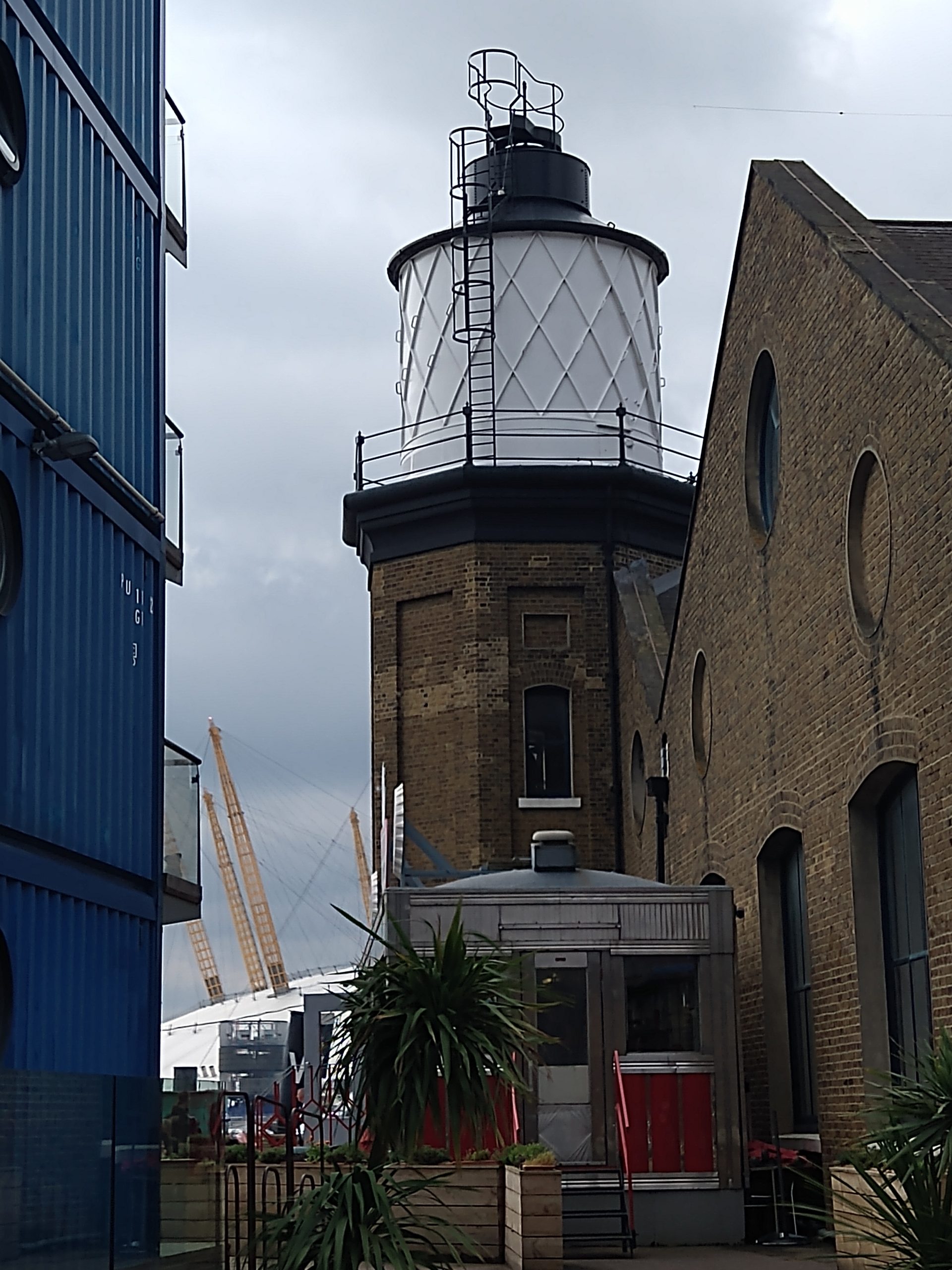 Trinity Buoy Wharf is located in a historic part of London, adjacent to the former East India docks and opposite the O2.  Perhaps better known now as Container City, a studio and office complex for its use of repurposed containers but also an established Arts & Culture  Centre. Located at the confluence of the Rivers Lee and  Thames, it was the base for The Trinity Company who established Trinity Buoy Wharf as its Thames-side workshop in 1803.  In 1869, Trinity House set up an engineering establishment at Trinity Buoy Wharf to repair and test the new iron buoys then coming into use.   The lighthouse (above) was built in 1864–66 by James Douglass for Trinity House. It was used to test lighting systems for Trinity House’s lights around England and Wales and for training prospective lighthouse keepers. Michael Faraday carried out experiments there.  The Wharf continued through the twentieth century, closing in 1988, to be responsible for supplying and maintaining navigation buoys and lightships between Southwold in Suffolk and Dungeness in Kent.  Further information here.

There has been a lot of building and old warehouses, previously seen in 2020, have been replaced by very tall apartment blocks along Orchard Place. Each individual apartment is pre-assembled and lowered into place with tall cranes.   Signals were blocked to the north east on 2m. The cranes may also have contributed to the high number of carriers on 70cm which hindered attempts to use GB7HH and GB7CH multimode digital repeaters. 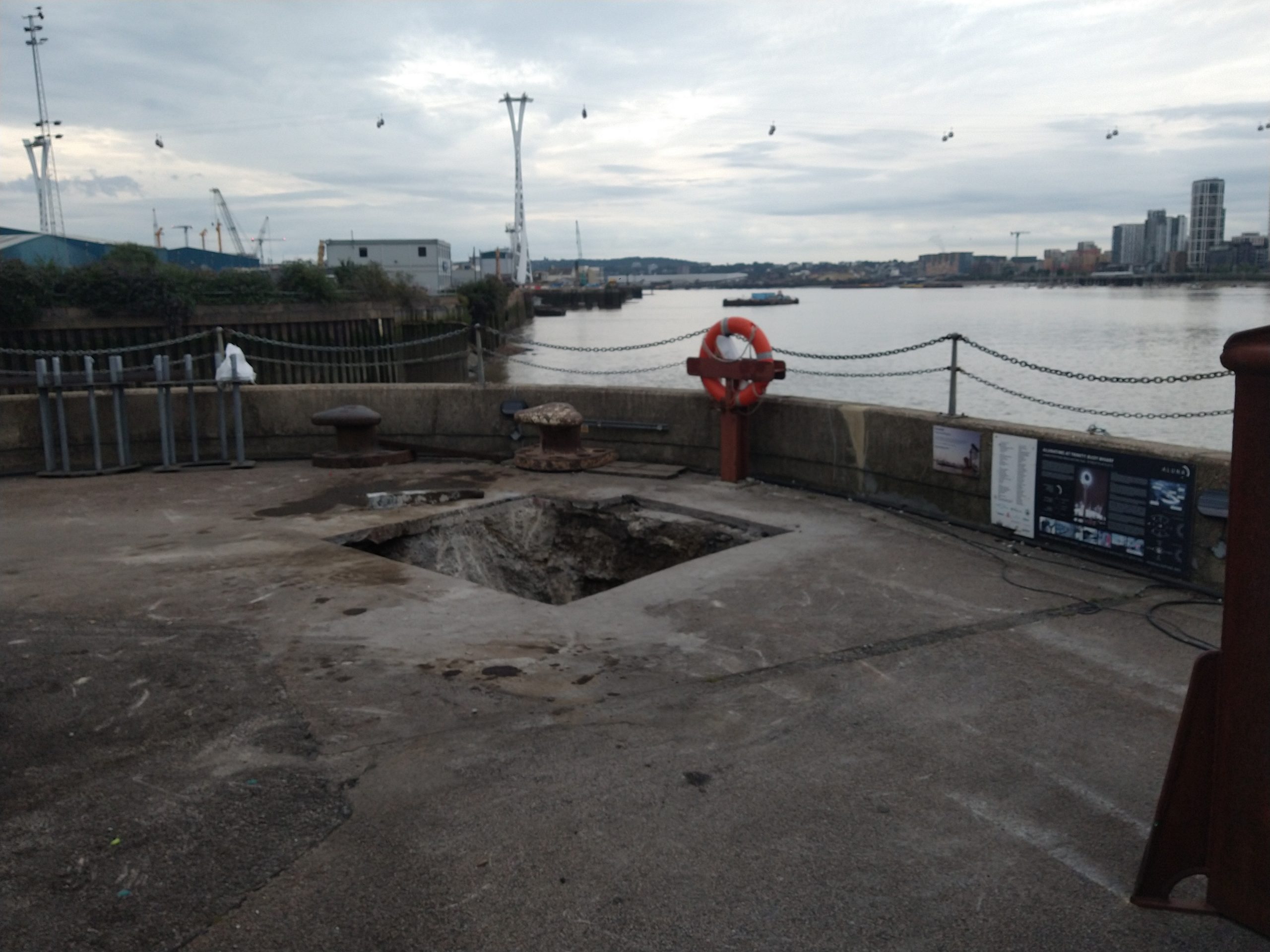 A planning visit the previous week had secured a spot on the quay.  Work to fit two large Dollies (photo above),  in readiness for a steamship to come alongside later in the year, had over-run. What was missing was the Dollies and over two cubic metres of  poured concrete; the area was cordoned off.  Plan B came into operation on Friday afternoon, to use the business premises of Ben M0LGN alongside in the Container City.

Set up started at 08:40 on Saturday, leaving at 8 am from Theydon Bois with David M0VID already loaded with everything needed from the  storage location in the Essex countryside. We met up with Ben soon after.  Richard G4DDP, Selim M0XTA, Brian G4CUQ and John G0VEH arrived in the next 10 minutes.   Equipment was moved upstairs and set up. 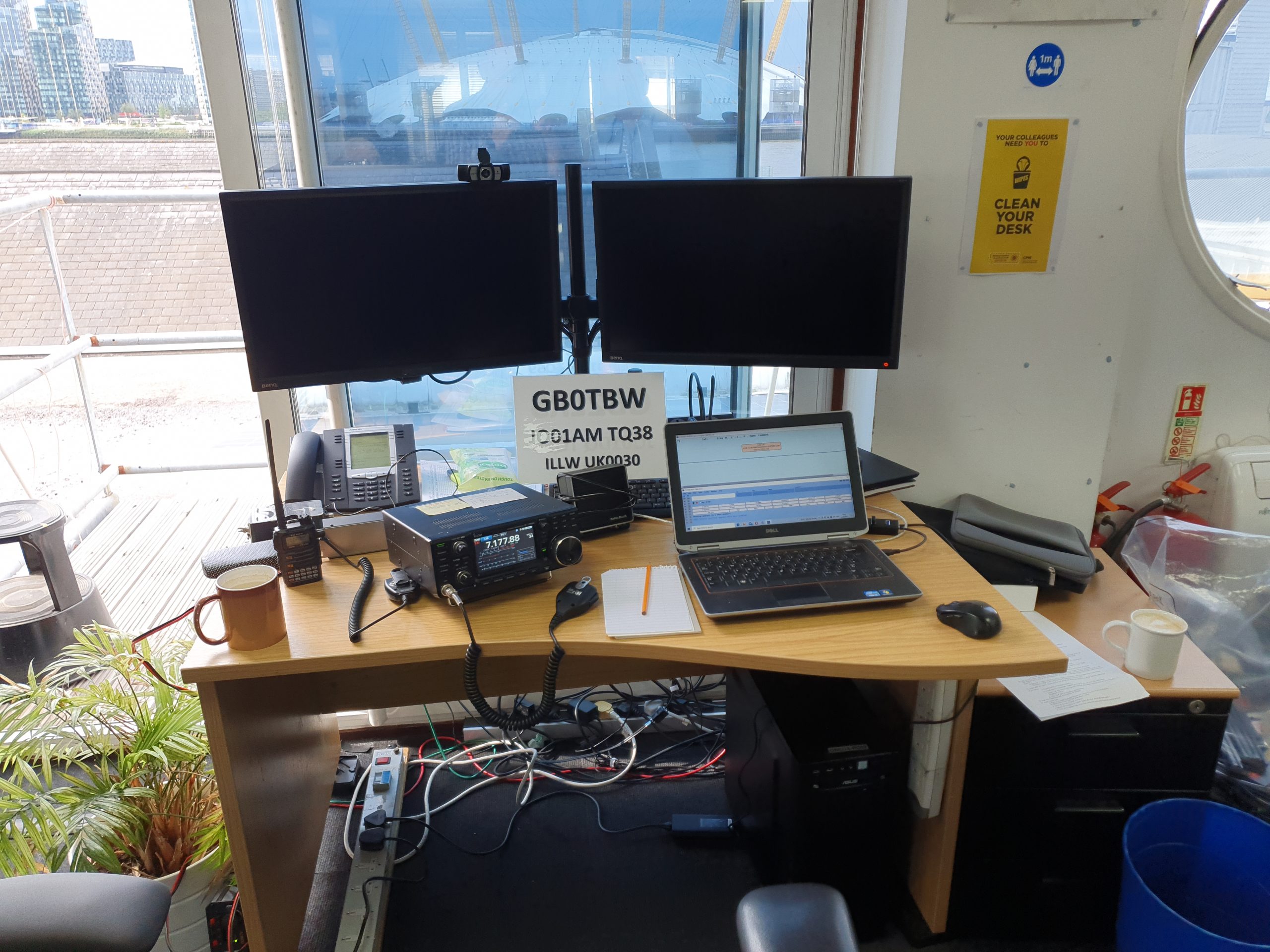 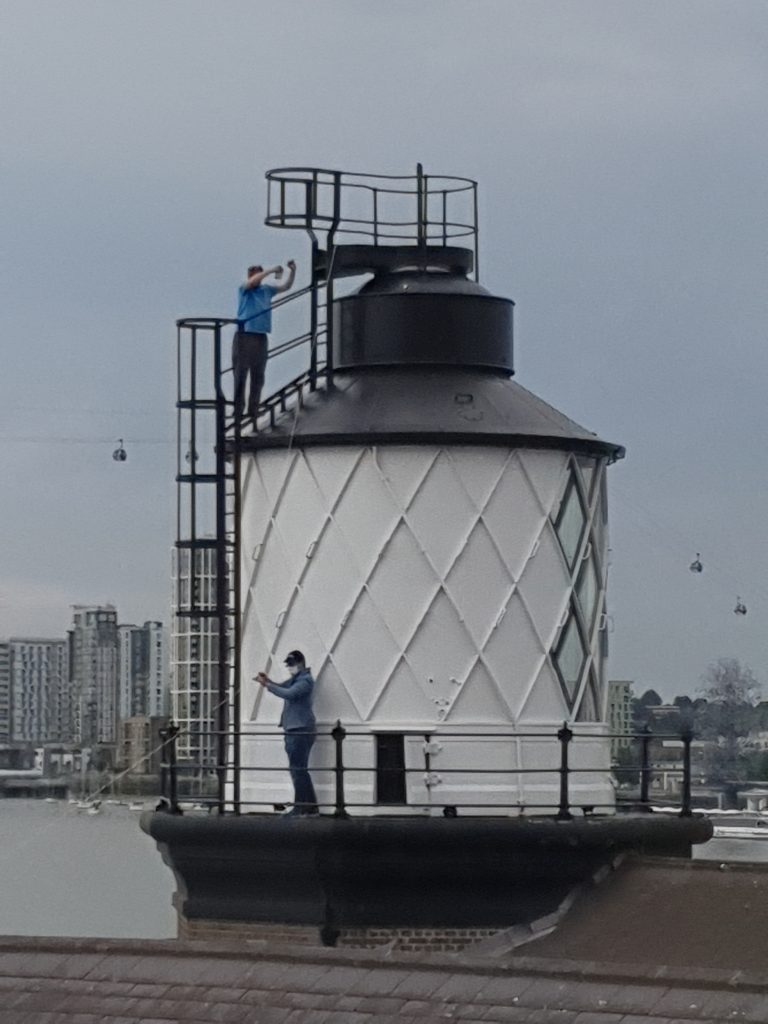 After some lengthy manoeuvres (to avoid the public below and in front of the Lighthouse), an  end-fed 40m antenna, made by Richard G4DDP was deployed  from the balcony of  Ben’s business premises to the Lighthouse.  The photo, below right,  shows the end result and (right) Ben at the top  and Selim M0XTA around the perimeter whilst setting up. 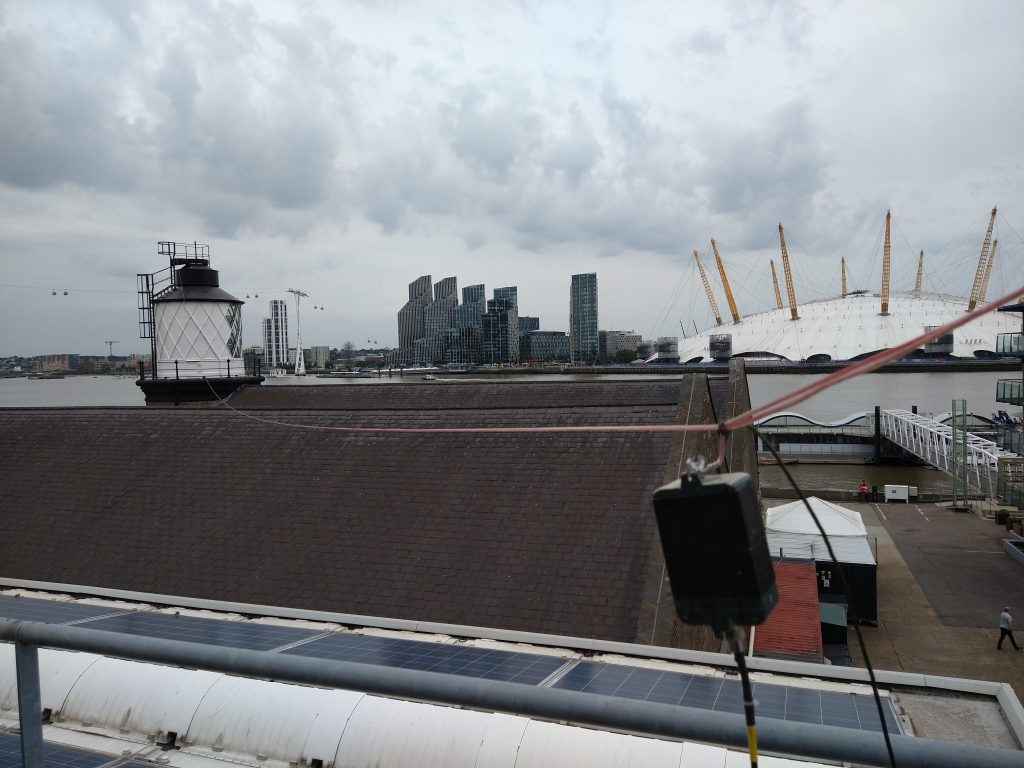 Unfortunately, the two building had PA systems and wiring highly susceptible to 100W SSB on 40m.  The wedding reception in the far building and the Gym next door suffered complete overload and we could hear the garbled SSB QSO Richard was having with a GM station clearly.   In addition over S9 of noise made the antenna unworkable.   With “Plan A” and the quay, the planned 80m / 40m trapped dipole is sufficiently clear and previously hasn’t been a problem.  HF operation was stopped for the day.

With sufficient operators available, some of us retired to the Orchard Cafe for lunch. Others used the Fat Boy Diner. Plenty of choice of cuisines available. 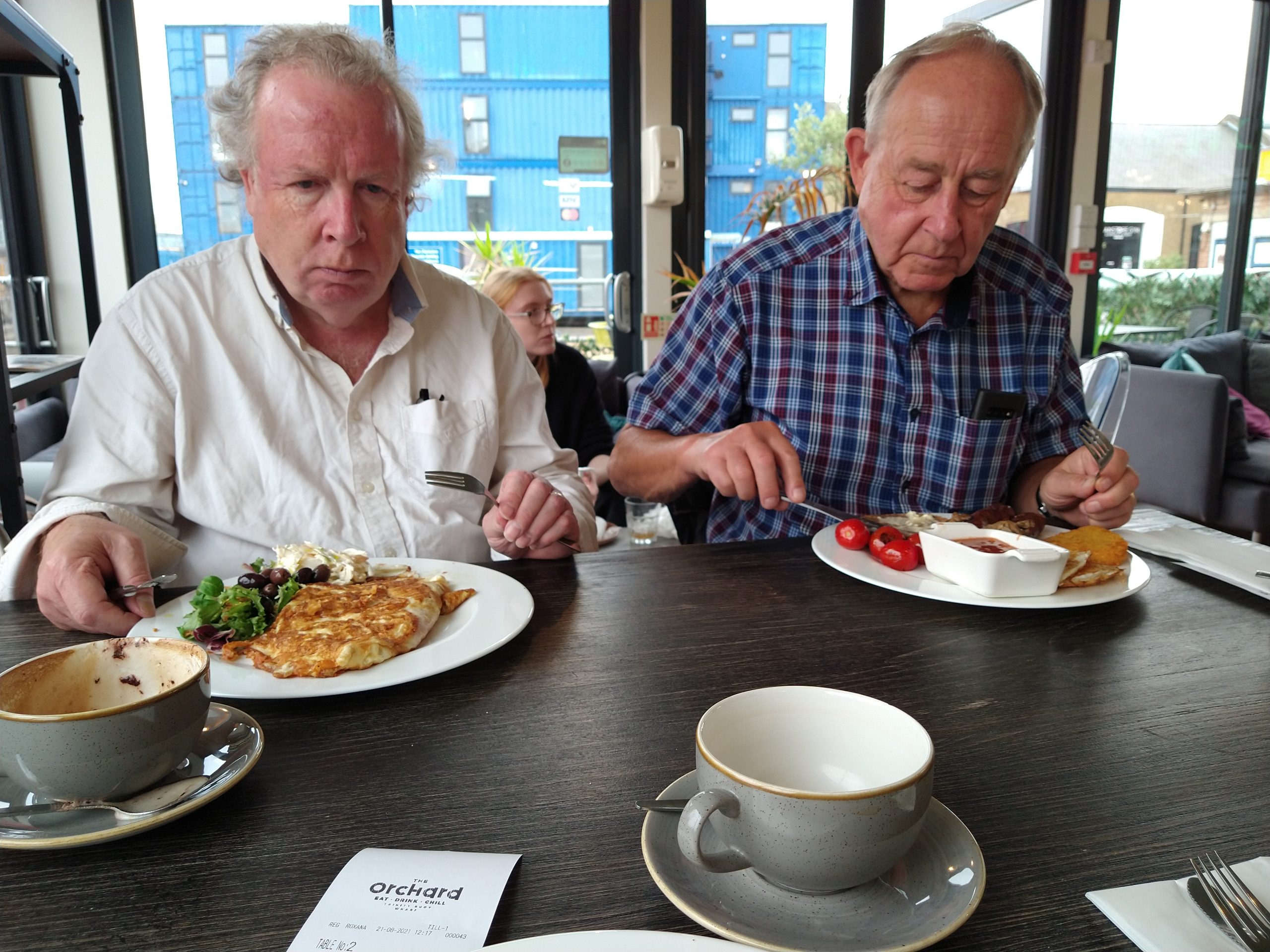 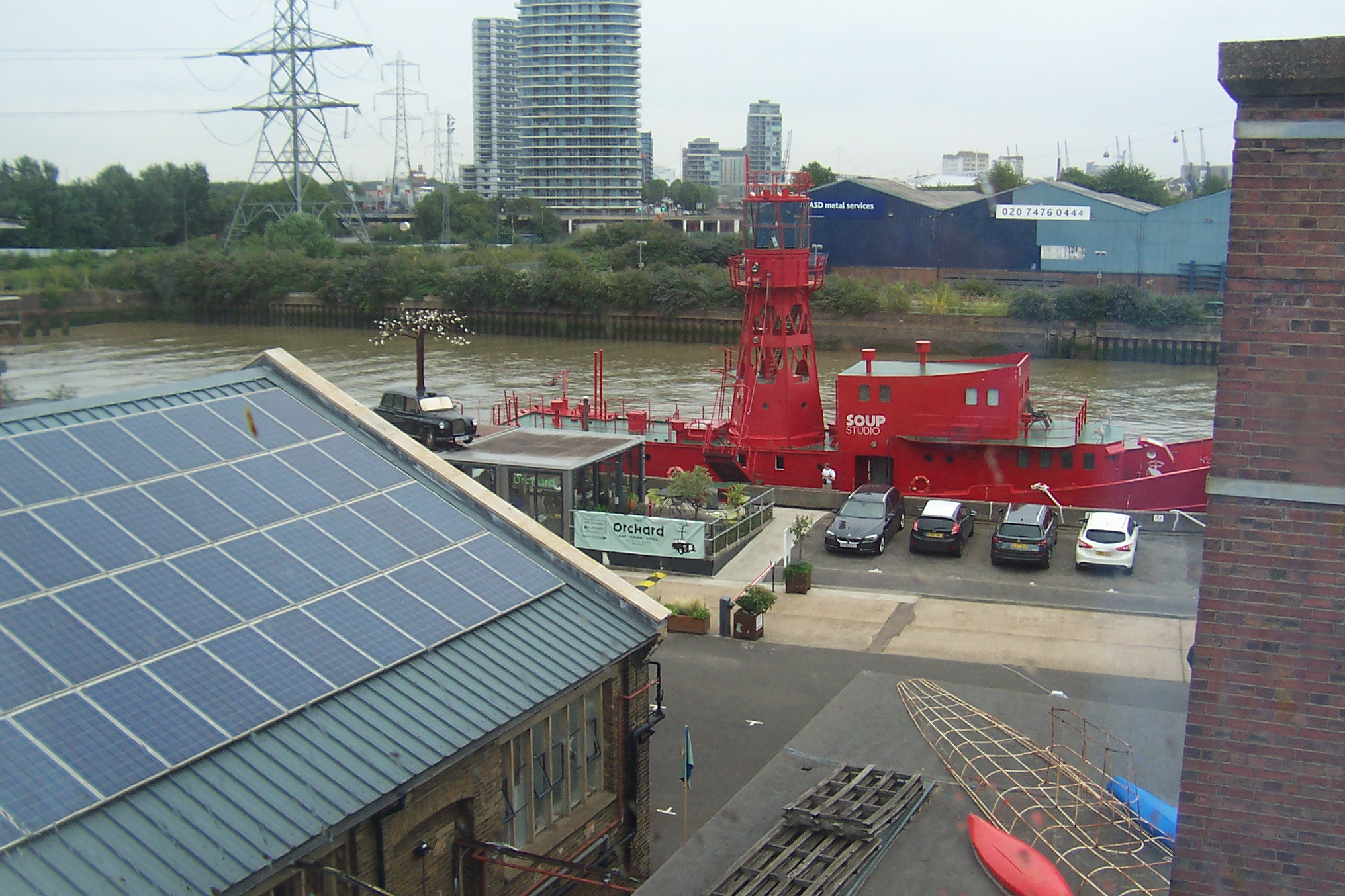 2m activity continued until 4pm and several stations were worked, including club members. 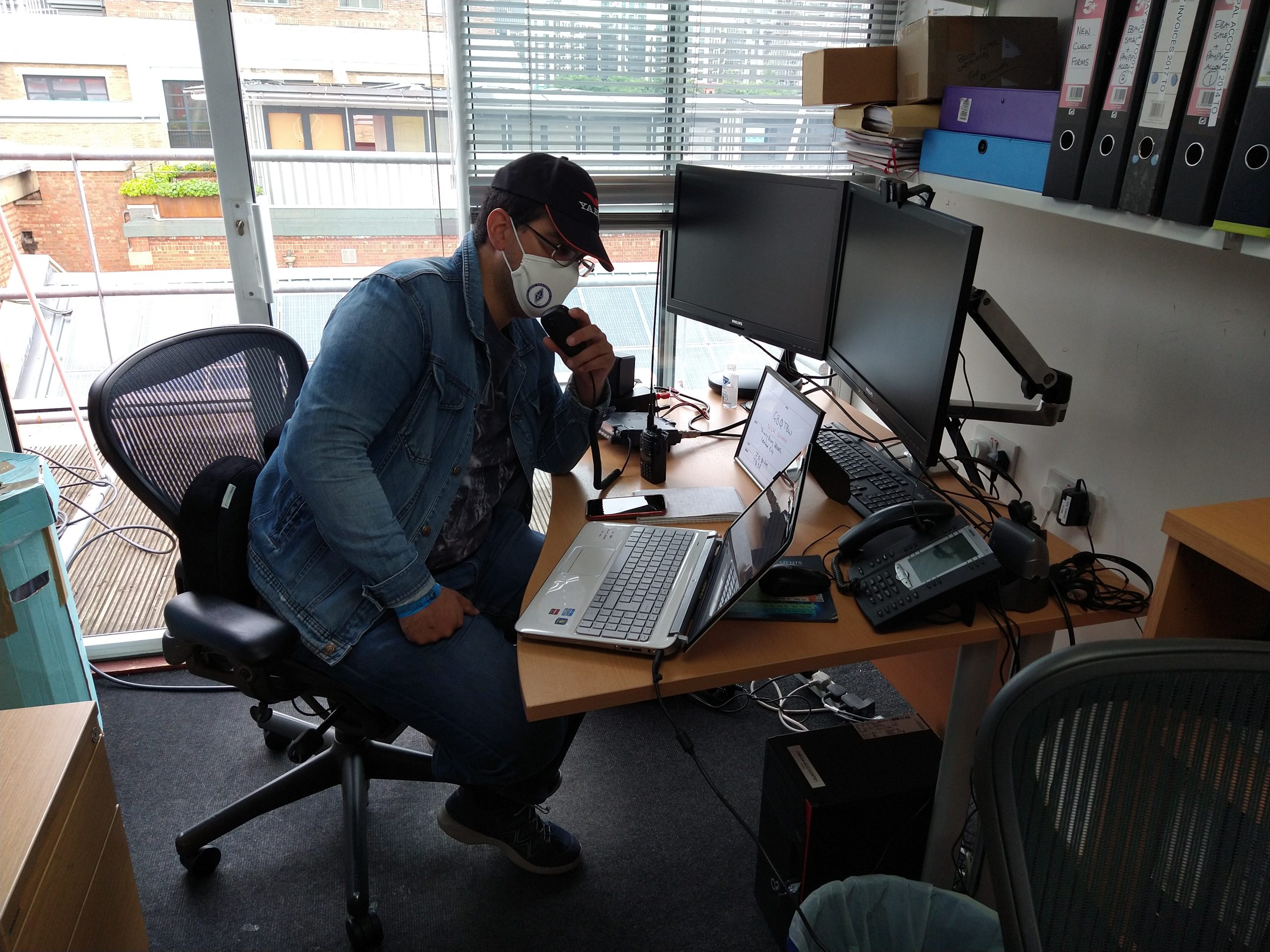 Selim M0XTA, with Brian G4CUQ, arrived on site early (before 9am) with his Sigma SE-X80 multi-band vertical.  This was installed on the balcony.  Selim was pleased and relieved to work several Lighthouse stations, the first one was GB4LD (UK0232) on the Lizard. No complaints from the Gym or Wedding venue this time and a lower noise table. 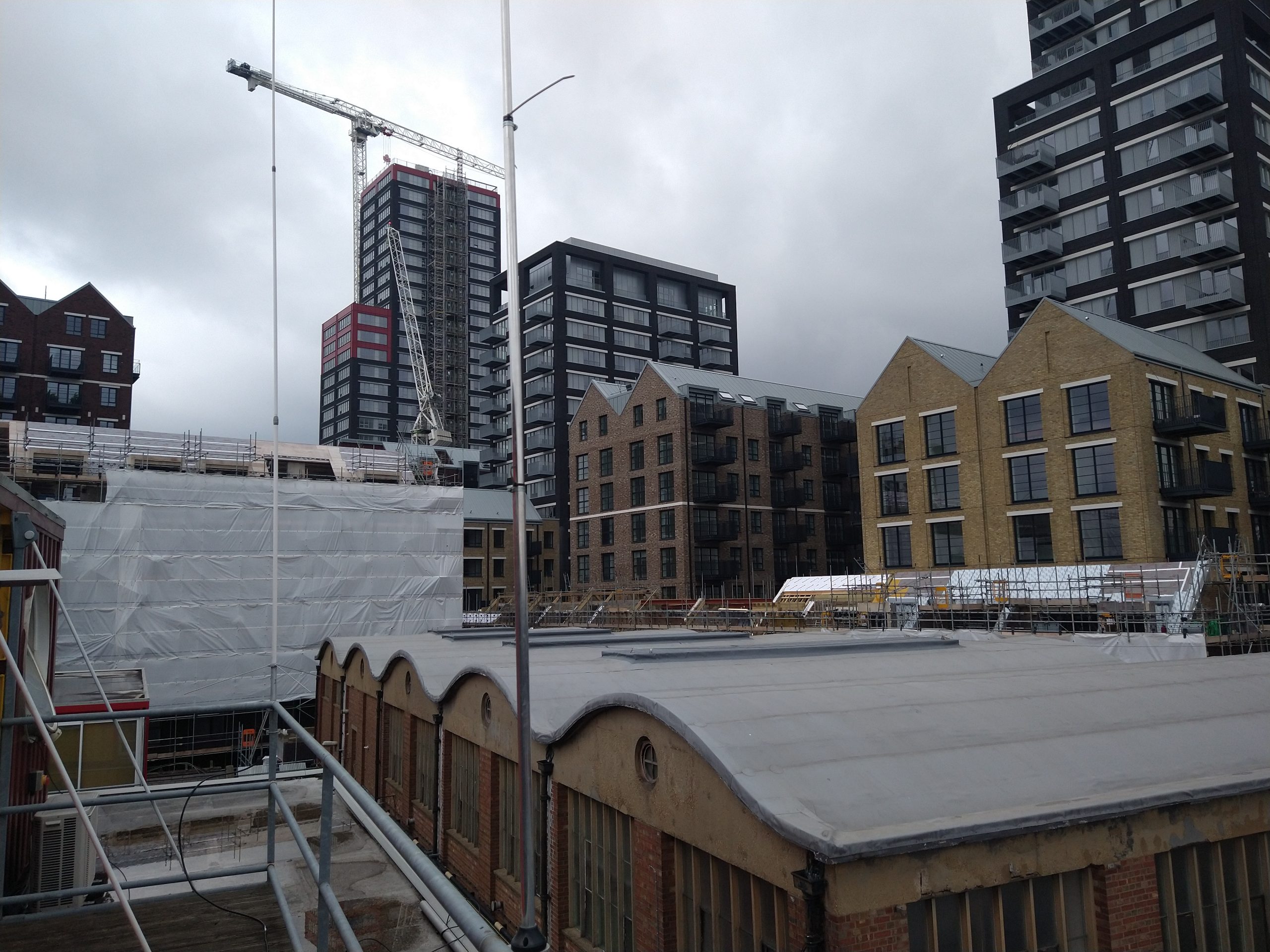 Selim M0XTA’s Sigma vertical is in the foreground (note the gap to the north west in the high-rise apartments. At the moment…..).  Ben M0LGN’s 2m/70cm Diamond X510 collinear in the background was used for 2m FM.

During the day eight ILLW stations were worked on 40m under fairly adverse conditions. Other stations on 40m and 20m included M0YOL in Dagenham and elsewhere in Europe including Moscow.

From Richard G4DDP
The last three 40m contacts were the same German family who wanted the GB call !

DL5PIA Petra mother, DL7PIA 13 year old daughter Pia, DN3HBB brother Reiner of Petra. DN call is an educational call in Germany prior to getting full licence. All three spoke perfect English !! Spoke with all three giving background to our call.

Over 20 2m stations were worked on Sunday, 41 in all over the weekend. Mostly in the London area but extending to Canvey Island and Bishops Stortford to the difficult north east.  2m operators included  Selim M0XTA, John G8DZH, Martin 2E0UKL and John G0VEH.

We worked 9 lighthouses / lightships  on the vertical HF aerial. Also inter-G propagation was not good on 40m.  Other EU lighthouses were heard but couldn’t be worked. UK 0095 was on 2m, the remainder on HF.

More details of the participating ILLW stations on the ILLW website .