LEFARS ventured out again at the end of May for another Field Weekend and back to the Rainbow & Dove Public House in Hastingwood, nr Harlow, Essex. Prior to our arrival, Club Secretary David M0VID had mown the field we were going to use from Friday evening 27th May and the whole weekend. It was also the Ride Essex-London series of bike rides with many roads closed off some of the weekend in Essex and East London. Fortunately access via the M11, Junction 7 was possible at all times.

Setting up Friday 27th May
After collecting the equipment needed myself, David M0VID, John G0VEH and I arrived at the R & D a bit later than planned, technical difficulties with David’s trailer. Peter G0IAP and Ion M0JLI were already onsite and ready to help set up. By 17:00 the event shelter was set up and soon after the trailer mast had a X-300 2m/70cm colinear sitting 25′ in the air. 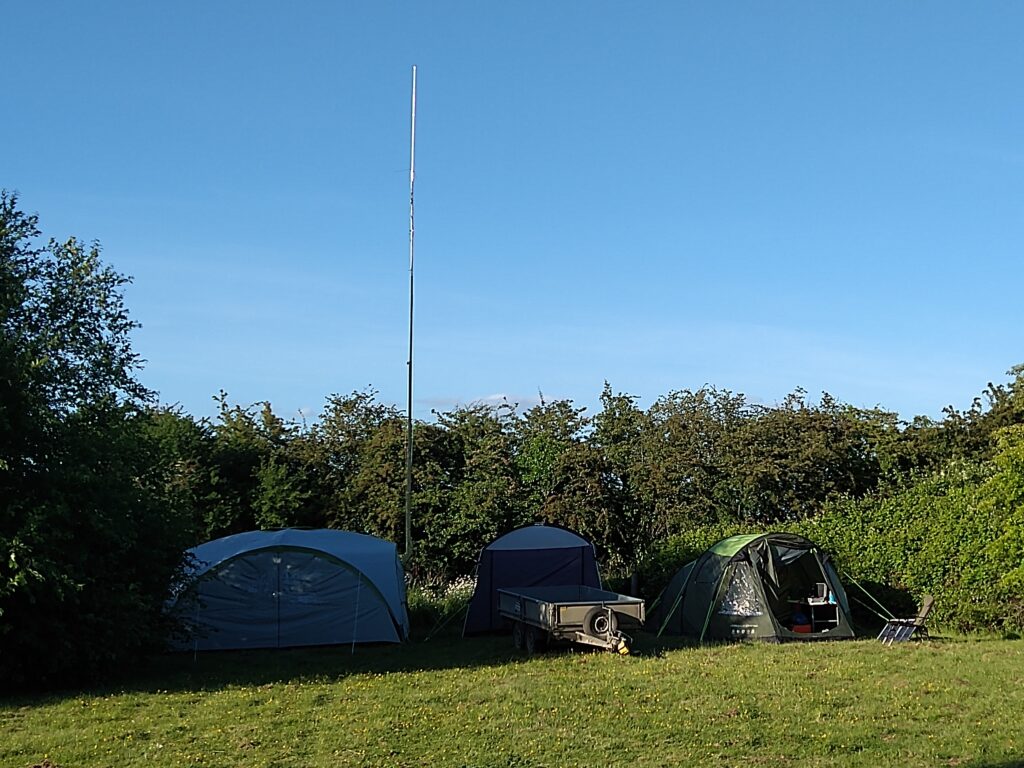 After setting up the basic infrastructure, we left at around 19:00 with Kerry M6WHT, Ion M0JLI and his friend Eddie to camp overnight.

Saturday 28th May
Two more masts were erected to support a 40m / 80m trapped dipole on the trailer mast. Some operating was done on HF and 2m, using the special 60th Anniversary callsign GB6OLR, until lunchtime and a R & D pub lunch (see photos). 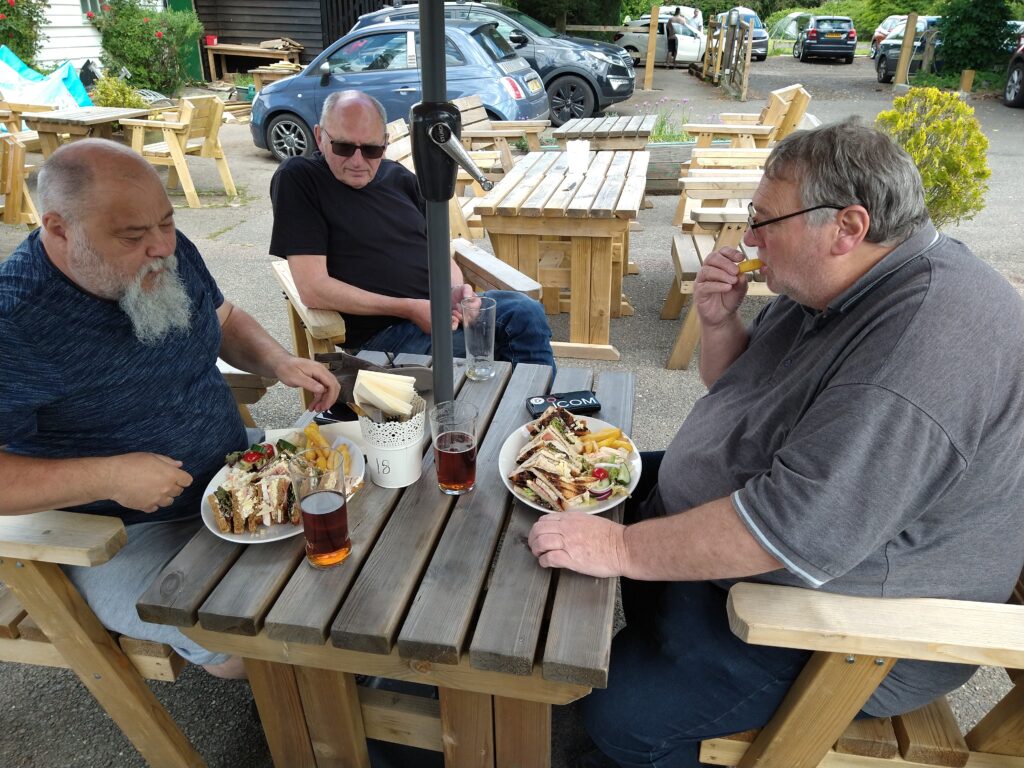 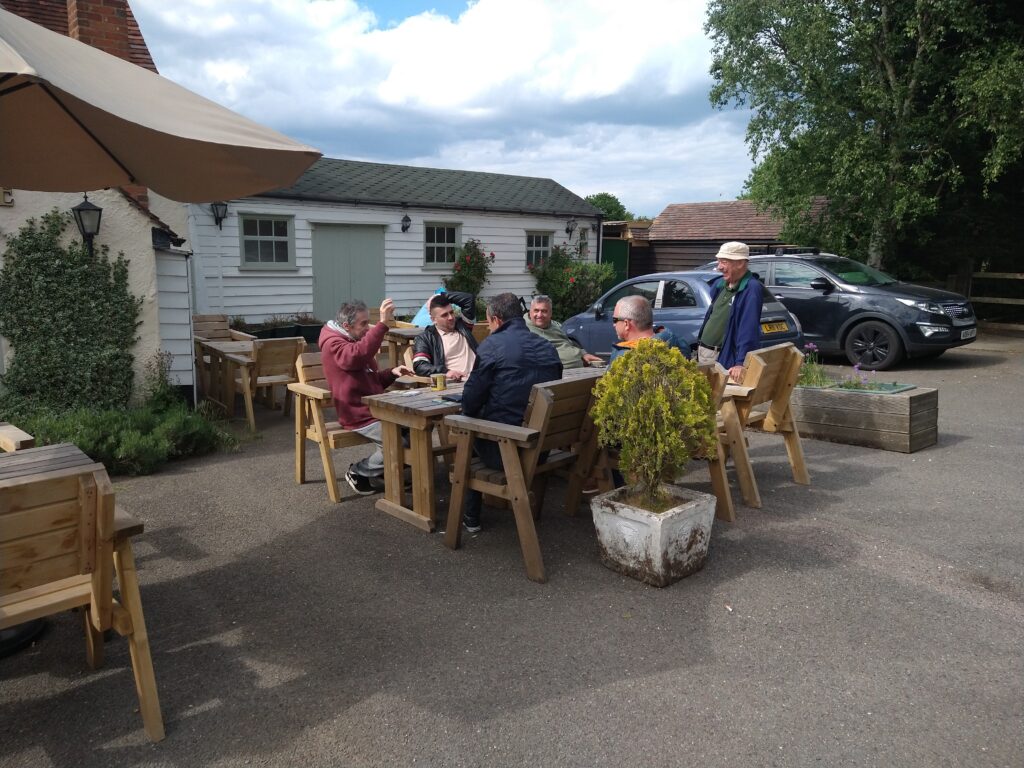 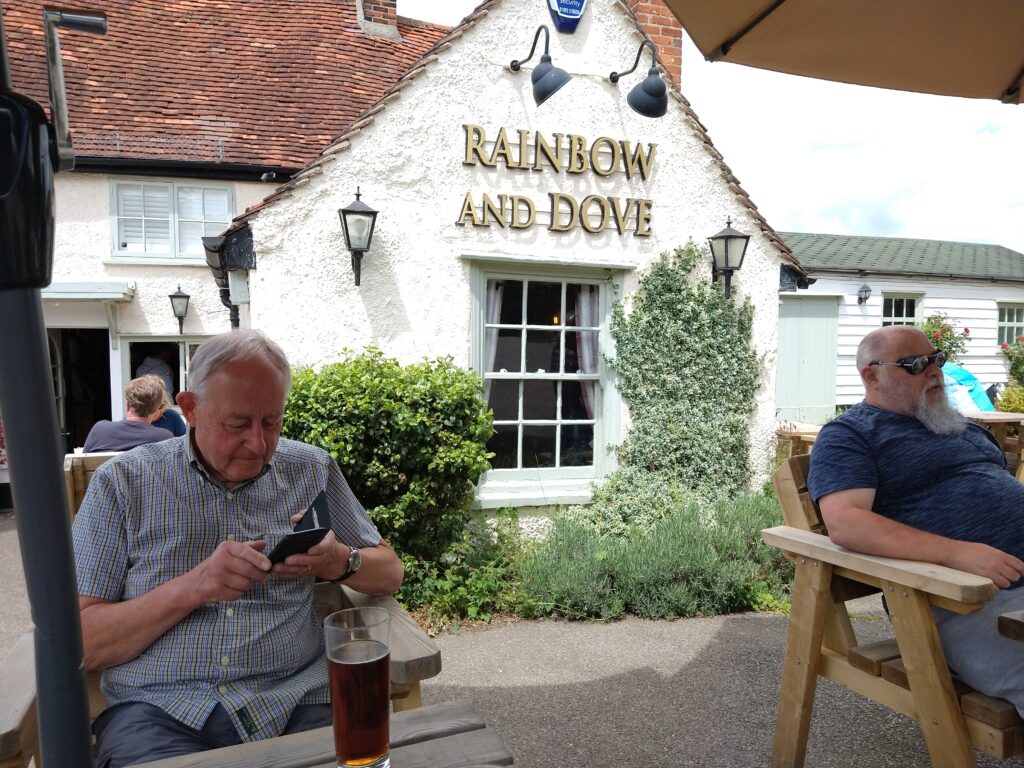 Richard G4DDP with a pint of Adnams Southwold. 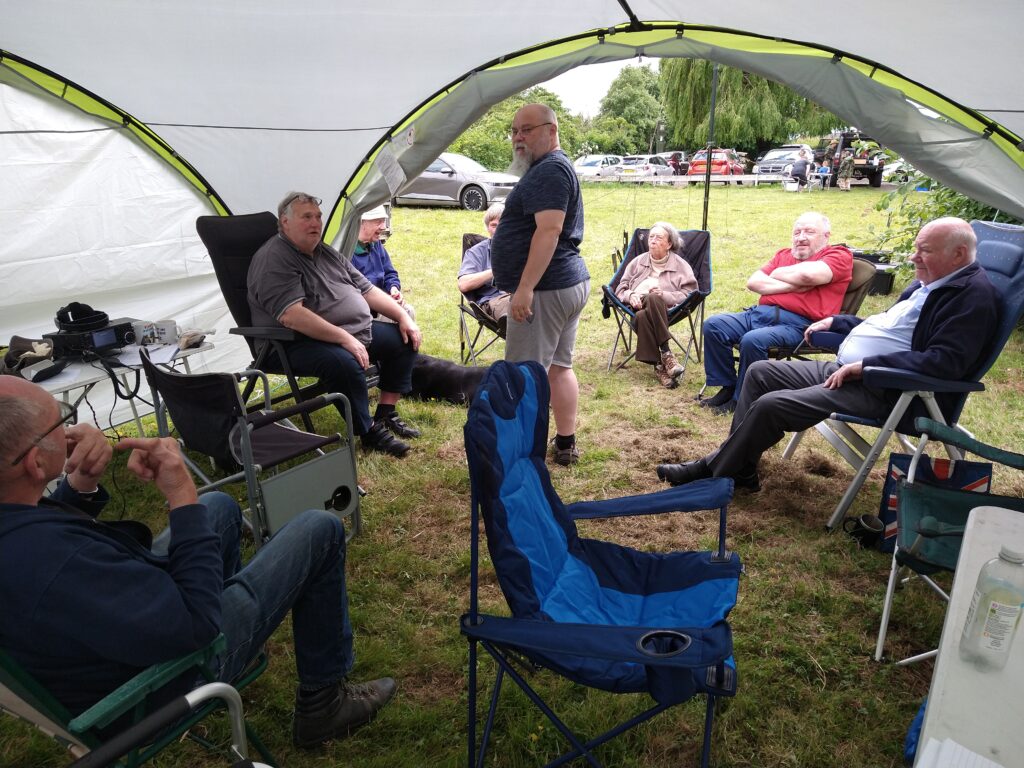 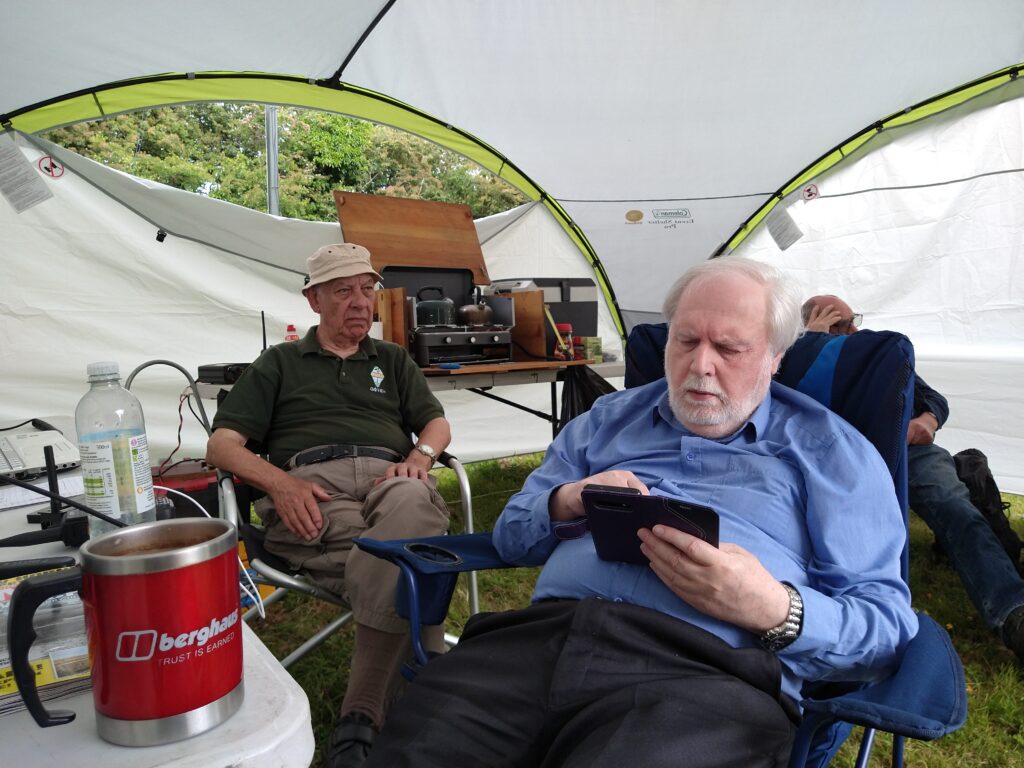 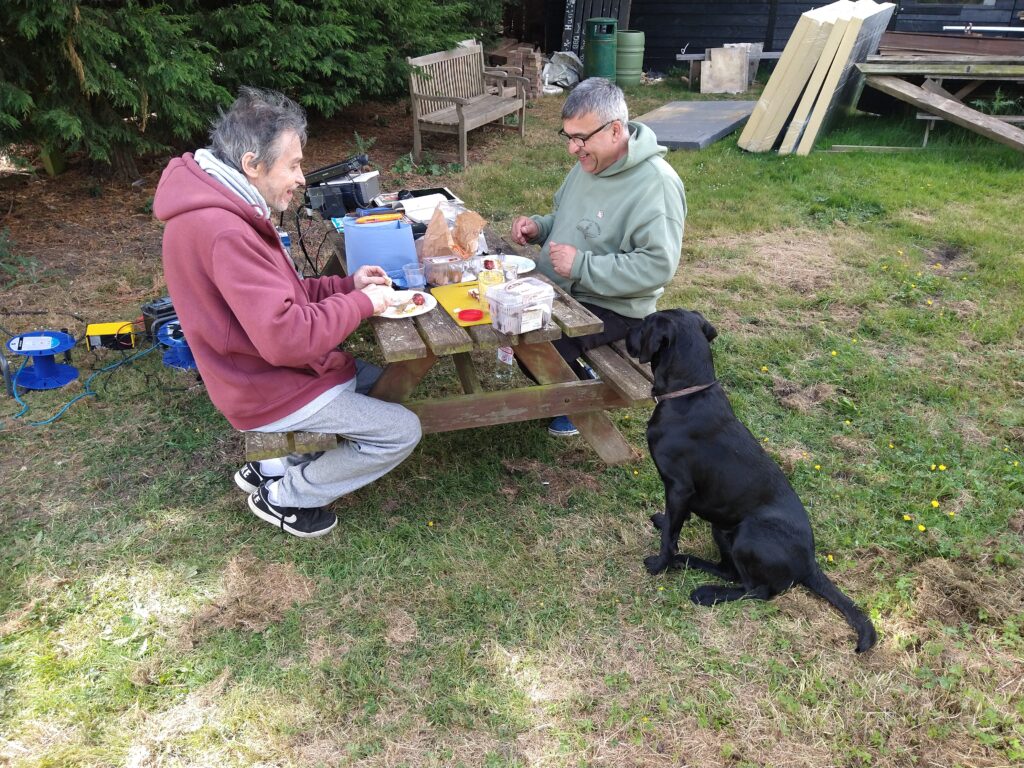 Orla waiting for her breakfast from Eddie and Ion …. 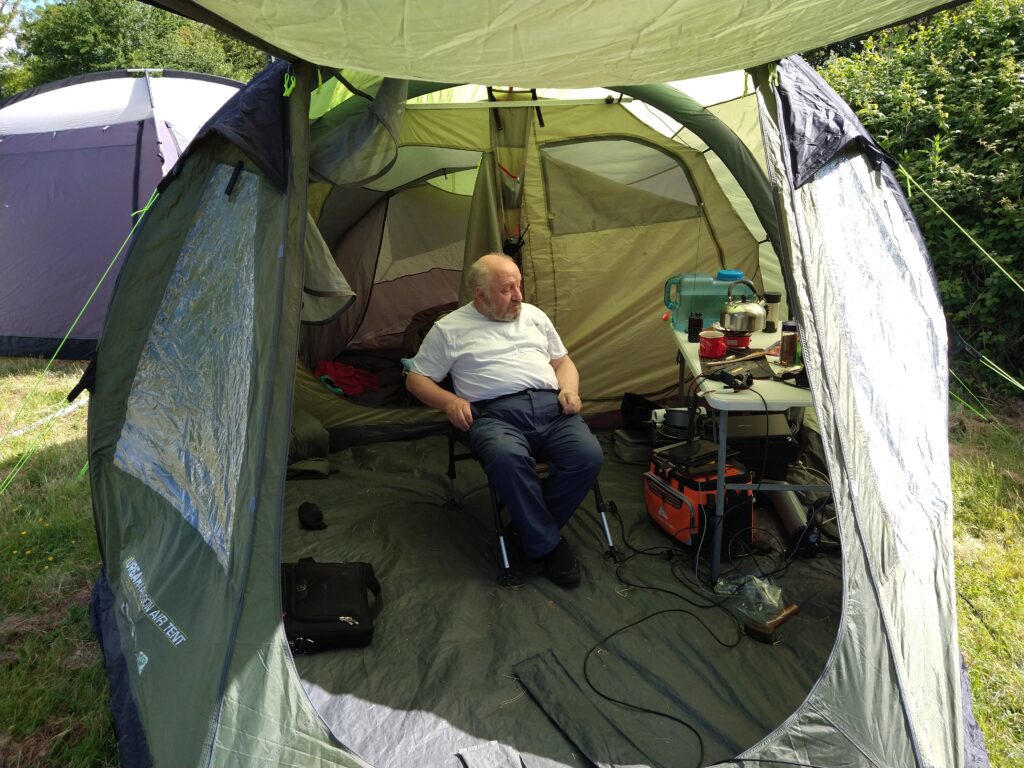 During the afternoon there was operating from several tents and operating positions. 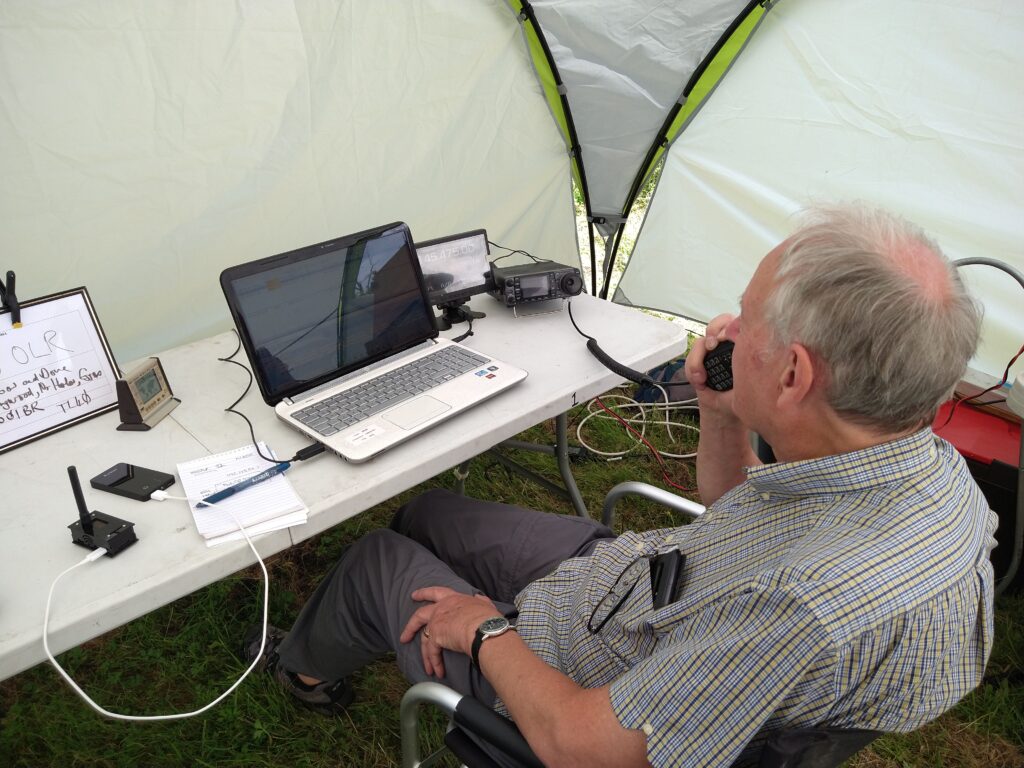 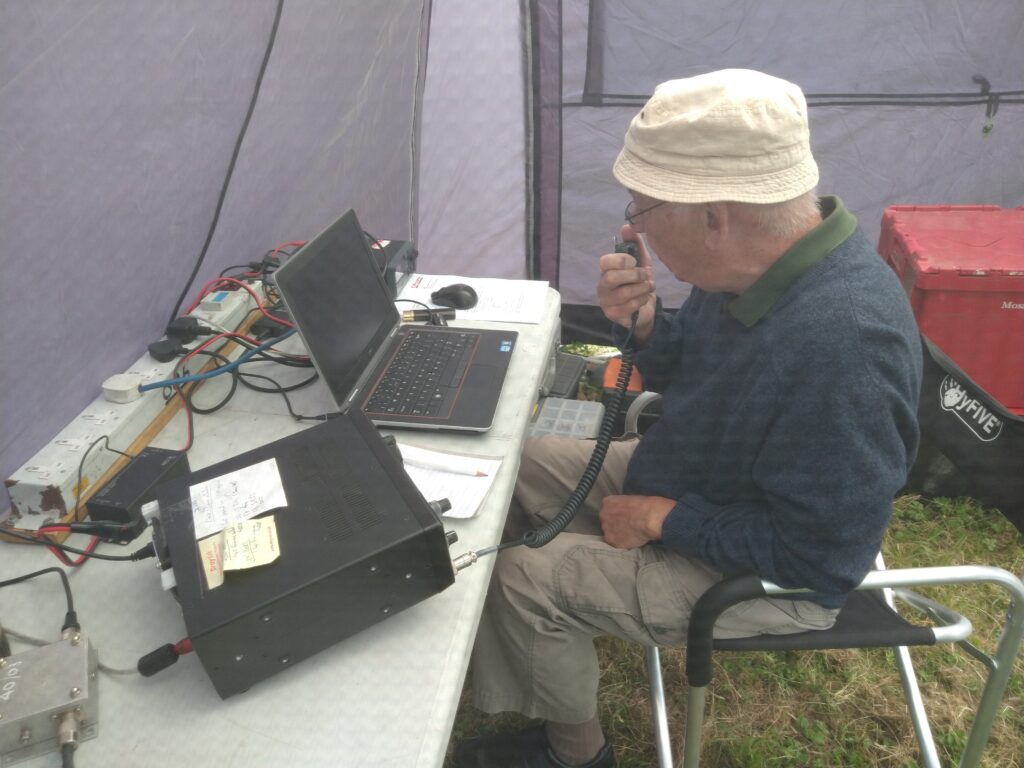 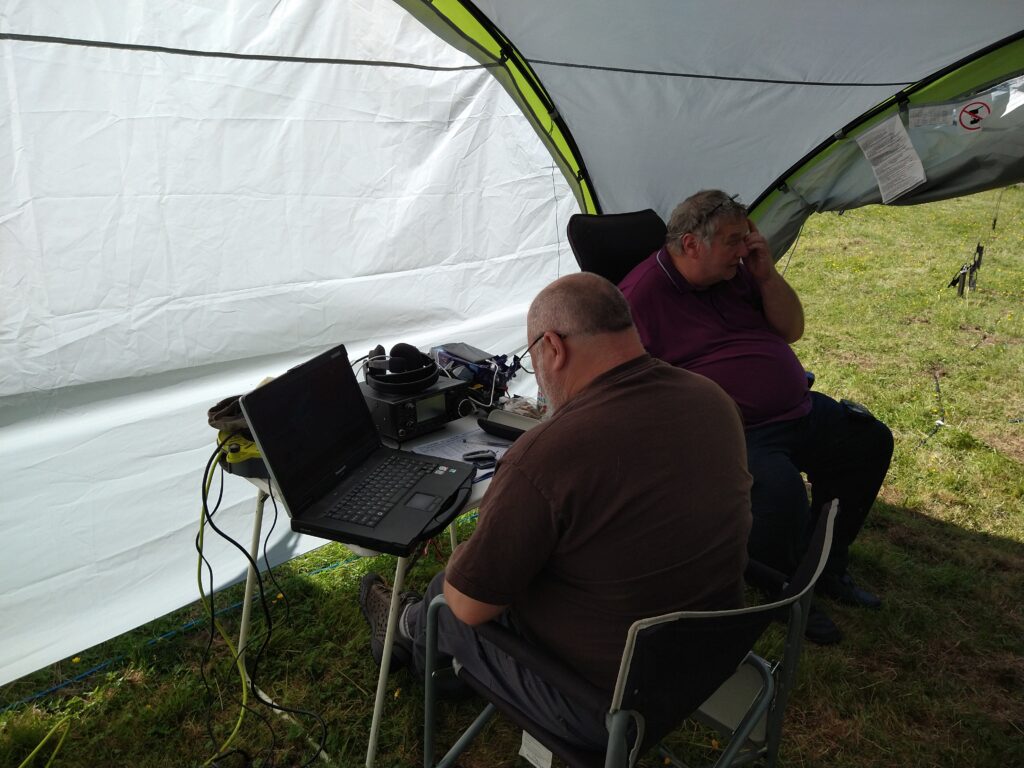 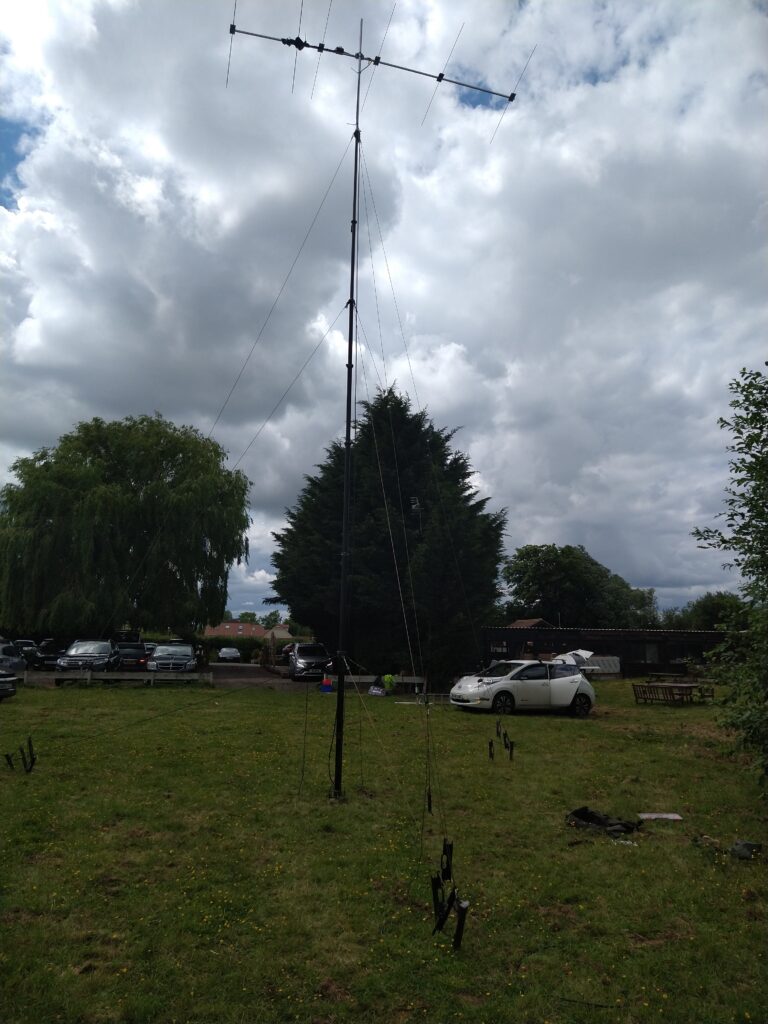 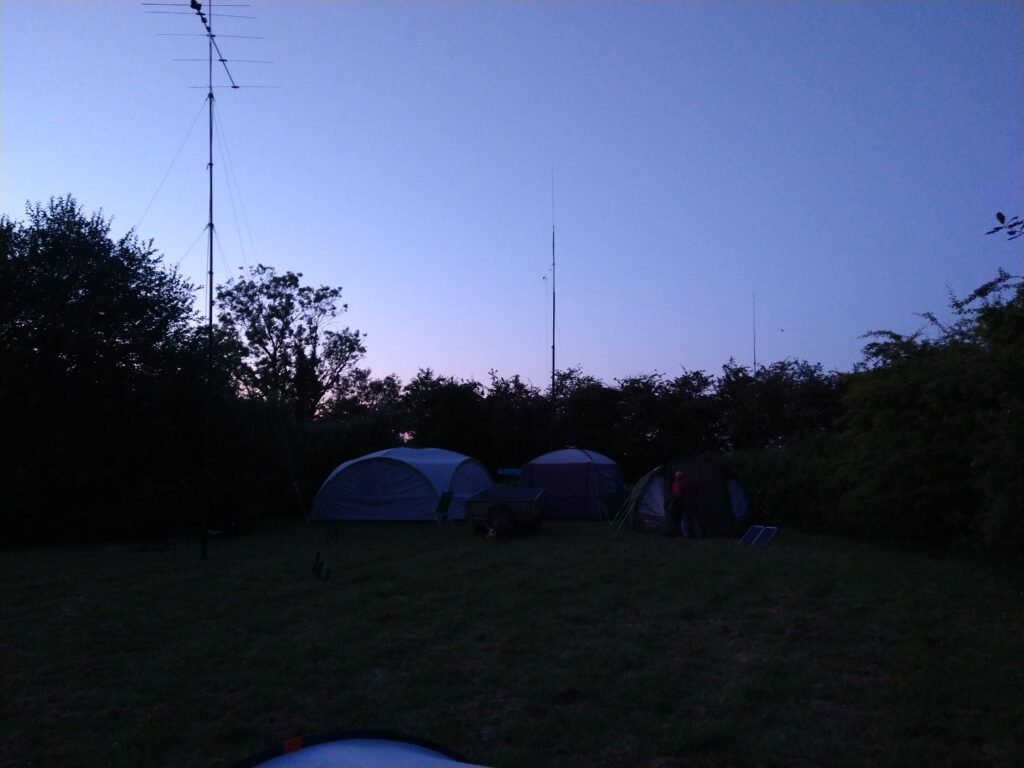 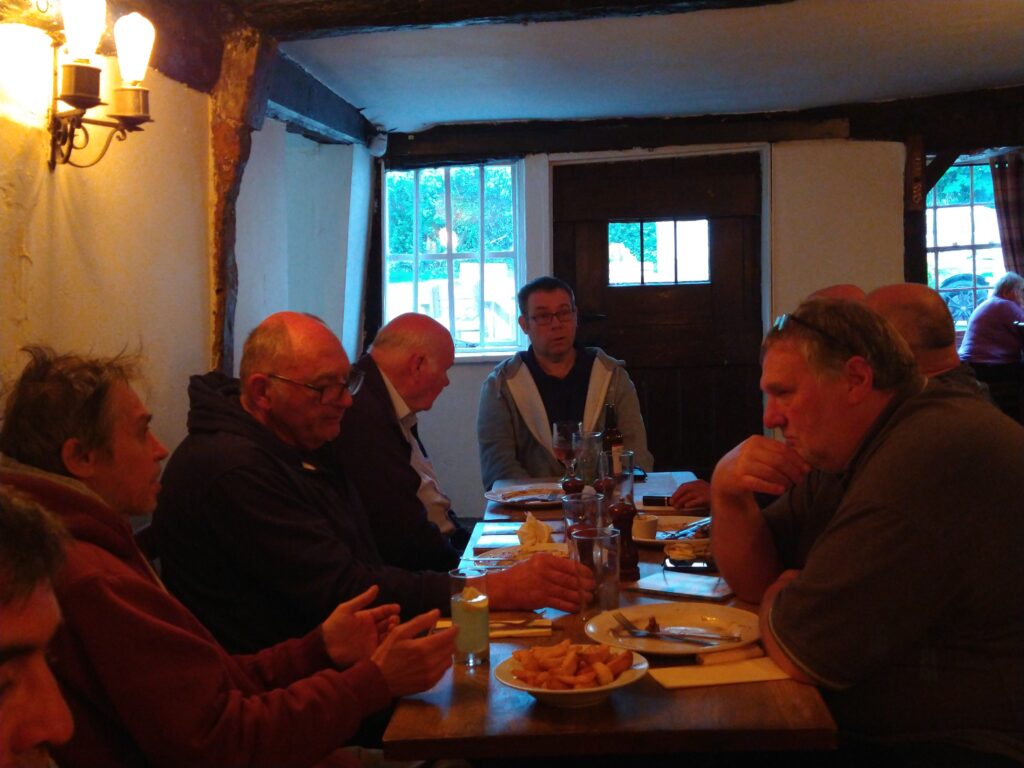 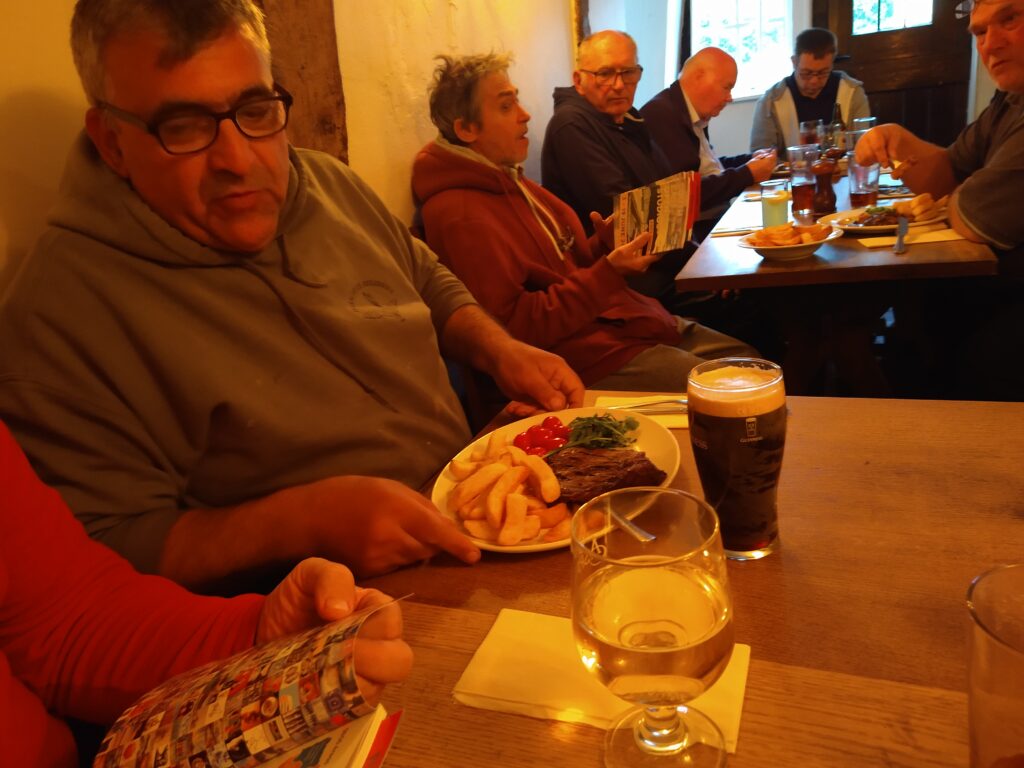 Sunday 28th May
I arrived onsite at 09:20 after a 24 mile, 40 minute detoured route down to the Waterworks roundabout via the M11 – normally it’s an 8 mile direct trip from Theydon Bois. Ride London road closures had encircled where I live, others had the same problem. 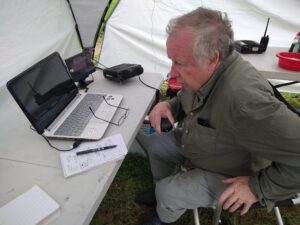 There were less visitors on Sunday but Gareth 2E0PSN saw our antenna farm and dropped in to say hello (known to Dave M0UPM). Martin 2E0UKL also. 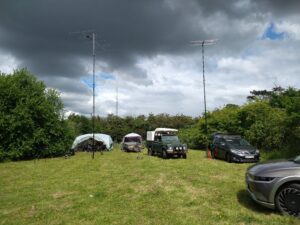 The weather had threatened to change and rain seemed to be imminent mid-afternoon. A decision was made to start to pack a bit earlier to avoid having to dry out tents and also to use (some of) the roads previously closed for the cycle event. We left the R&D around 16:50. However, after everything was put back into store, I got home at 18:45.

Operating Report from Richard G4DDP
Callsigns used this weekend were GB6OLR on 40m, 80m and 2m plus G4ONP on 4m.

I also used my G8BXC callsign on 4m and 6m using an IC7300 feeding a combined 4m and 6m MOXON at 8m on a Clark pump up mast. Activity on both bands was very low with the occasional sporadic e on both bands. I was intending to operate on the 4m UKAC contest but due to potential inclement weather, it was decided to close down the club’s operation early on Sunday afternoon. I did work one station in Yorkshire but conditions were generally poor.

Dave M0TAZ was using a 6 ele beam for 4m for a more serious operation – log and map at the end.

HF wise we were using a 40m / 80m trap dipole at about 10m fed by an IC7300 computer logging with N1MM software. Conditions on 40m and 80m on the Saturday were dire but improved on Sunday. We worked stations around the UK from Scotland down to Cornwall.

For 2m we used a X300 colinear mounted on the club’s mobile mast at about 10m fed by an IC7000 for FM and SSB, the site at Hastingwood is around 100m asl. Activity on both days was quite low.

John G0VEH took advantage of the good weather to carry out essential maintenance on the club’s trailer mast. A few lighting issues to sort out with a rechargeable battery system ordered to run a pair of LED light strips in order to not rely on generator power.

Ion M0JLI was operating on 20m with his own station and inverted dipole.

Operating from a field next to R&D pub meant a pub lunch on Saturday was in order plus a number of members partook in an evening meal on the Saturday.

Not too many members attended due to other priorities plus the Ride London cycle event held around Essex and London meant that many roads were closed making it problematic for some to attend. 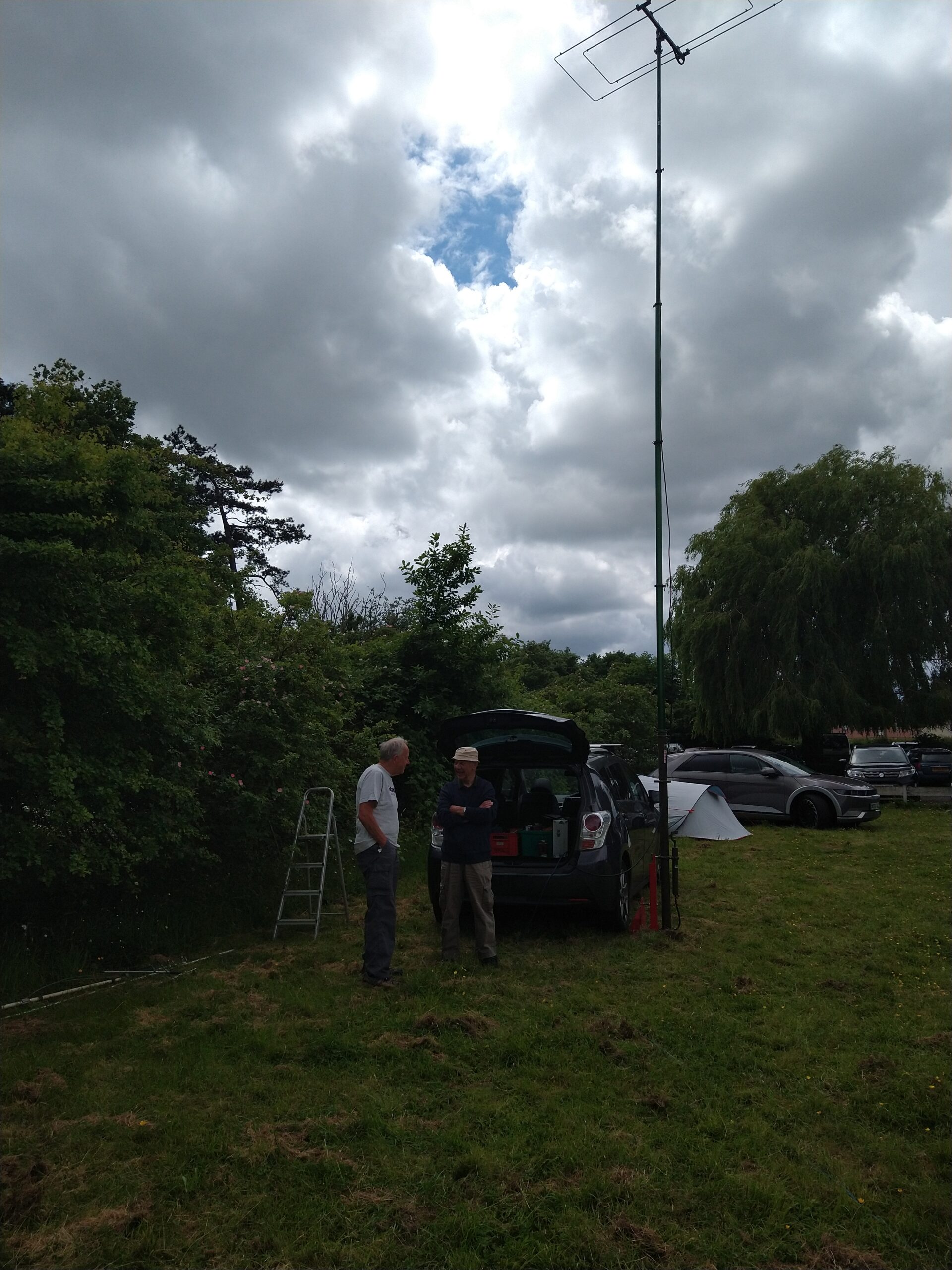 GB6OLR and GX4ONP logs (Club stations).
Richard G4DDP has provided a ADIF file with details of stations worked and bands operated. 42 QSOs in all for GB6OLR and GX4ONP. There were 25 QSOs on 2m FM and 4m FM. Many of the 2m QSOs were with LEFARS members. The remainder were on 40m SSB. 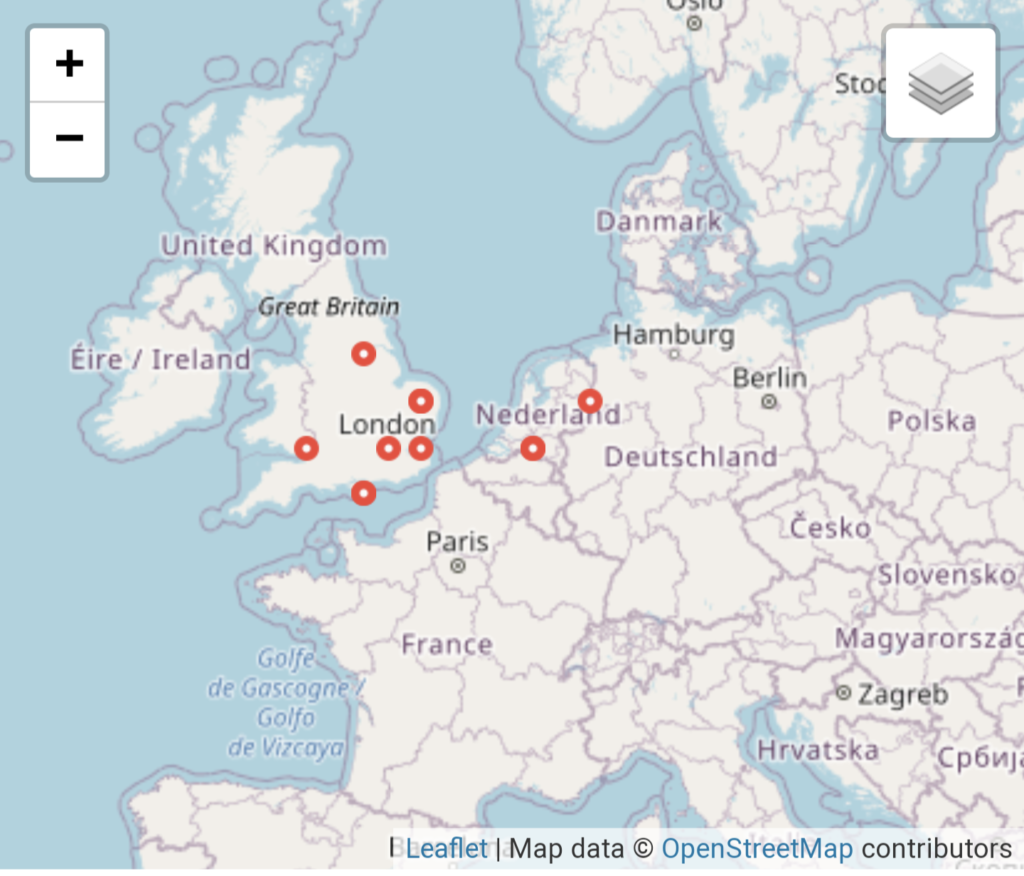 Summary
The R&D Field Weekend was an ideal opportunity to play radio in a friendly welcoming pub location, over a long weekend. The site does have some audio noise from the M11 motorway nearby but there’s plenty of room to put up antennas and operate in a RF quiet location.

The committee wishes to thank R&D owner Andy for allowing us once again to operate from the R&D.